Participants will have 8 hours to build a robot then compete head to head in a race to pop the most balloons in our custom built arena. This event is open to all UNT students, with any amount of experience.

Open to all UNT students, learn something new and make new friends.

The goal of this event is to give students a chance to learn how to build a robot and compete against their peers. Botathon is free to all UNT students and will feature free food, workshops, tech demos, and prizes!

When/Where is it happening?

Teams of up to four students will be given two robot kits (consult the parts list below to see what these contain), and 8 hours in which you may build as many robots as you want.

The challenge: to use your team’s robots to pop the other team’s balloons, while defending your own.

Each side of the field contains 13 balloons, and each team must place 4 balloons on their robot(s). The objective is to pop as many of the opposite team’s balloons within 4 minutes, the team with the most points when the time runs out, wins.

Of the 13 balloons on each side, eight will be placed at ground level and five will be placed on the elevated ramps in the middle of the arena. There is one point awarded for each ground-level balloon popped, two points for each heightened balloon and three points for each balloon that is on a robot. If a team can pop all of 17 of the opponent's balloons, they earn a five-point bonus. This works out to a maximum of 35 points in a single round. 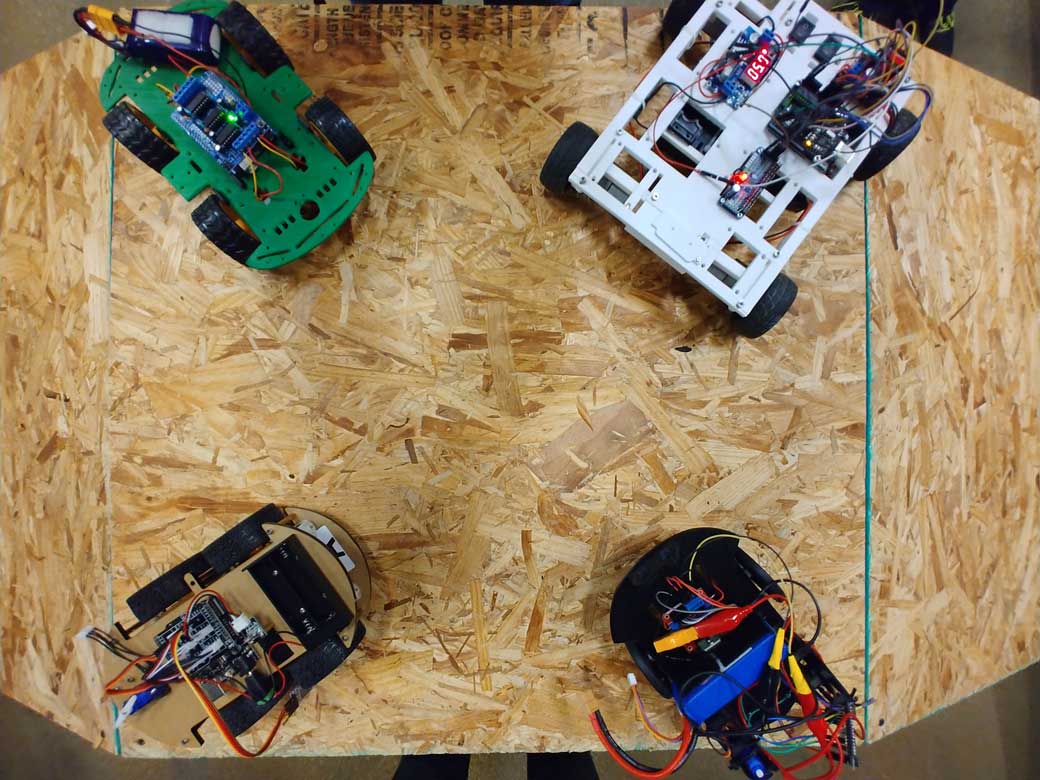 The field will contain baloons for each team to pop

CAD of the standing view of the field

3D CAD of the field

Birds eye CAD of the field

Each team gets two base kits, which consist of the below items.

These parts are able to be bought (using in-game currency) and will be in addition to the base kits parts that you are given freely. Each team is given $500 of in-game currency.

Teams will consist of 4 members. Each team will be given 2 base kits and $500 of in-game currency to buy upgrade parts. Participants are encouraged to form their team prior to the event, but there will be team making opportunities on the day for individuals without a team.

There will be mentors to assist teams during the build process, but mentors will not be assigned to a specific team.

You may order official UNT Robotics T-shirts to wear at the event, click here to order.

We're always happy to help, no matter how small or big your question is.